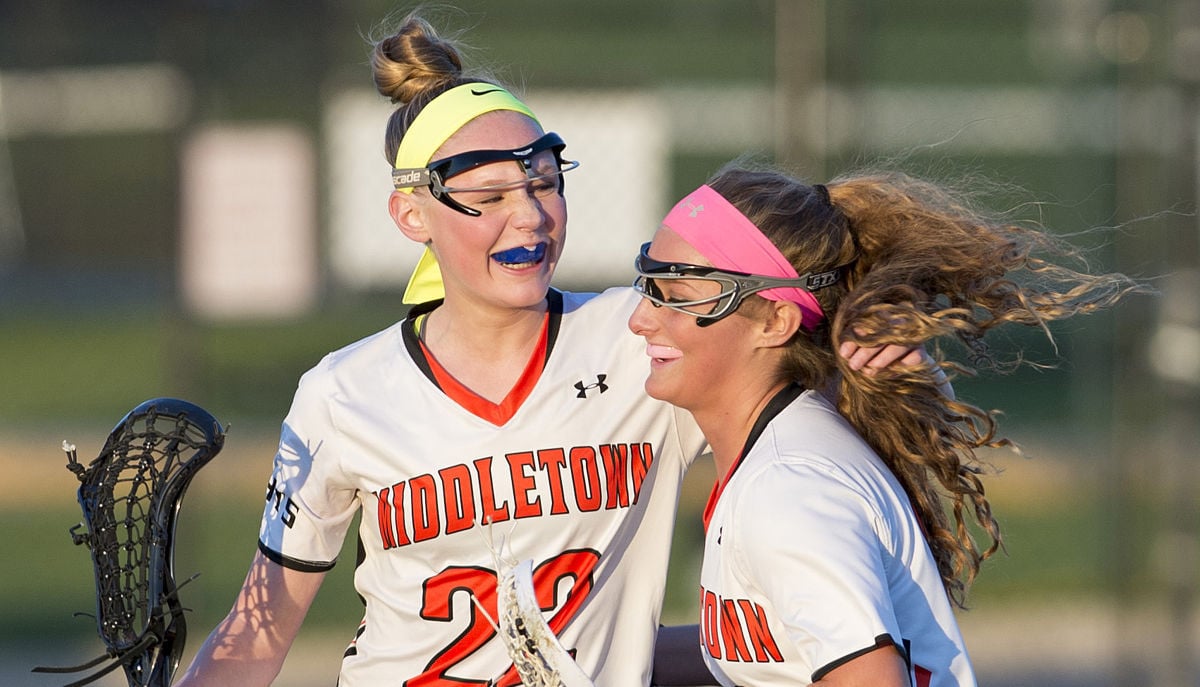 Middletown's Rachel Walchuck, left and Kristyn Staley congratulate one another after Walchuck scored a goal in the first half Tuesday night.

MIDDLETOWN — Still a junior in high school, Kristyn Staley was recruited to play Division I lacrosse at UMBC as a midfielder.

But, for Middletown High, Staley plays a lot of attack. When asked the primary difference between the two positions, she said, “A fourth of the field is taken away from me.”

But that doesn’t make her any less impactful.

Staley, a life-long lacrosse player, is once again one of the leading scorers for the Knights. In Tuesday’s 14-11 victory over Brunswick, she was the primarily catalyst, finishing with four goals and five assists.

“She has been playing so long, she just has those natural instincts,” Middletown coach Gretchen Martin said of Staley, who now has 12 goals and eight assists for the season despite missing a week recently with a foot injury.

Staley’s performance helped carry the Knights (6-1) on a night when they weren’t at their best.

Some of that could be attributed to Brunswick, a plucky team that jumped out to a quick two-goal lead and pushed Middletown the entire way. When the Knights extended their lead to 9-5 early in the second half, the Railroaders rallied to tie the game.

But Middletown managed to do just enough on both ends of the field to put the Railroaders away.

Sophomore midfielder Megan Cleverly won a number of draws after Brunswick had pulled even, creating the decisive scoring chances for her team.

“We kept our composure throughout the whole game,” Ridenour said. “Even when we were tied, we definitely stayed calm and brought ourselves together and played as a team.”

Playing as a team has been a bit of a challenge for the Knights because they have been dealing with various nicks and bruises. They have yet to play a game at full strength this season.

Against Brunswick, they were without leading scorer Riley Bradshaw, who recently twisted her ankle badly. Senior defender Peyton McCracken has missed a month due to an injury.

The Knights hope to be a little healthier heading into next week when they face Oakdale and Walkersville, teams they will have to go through if they hope to get back to the state semifinals for the second consecutive year.

“We have all been playing together for so long. I think we have good chemistry,” Ridenour said. “You can have skill, but, if you don’t have chemistry, it’s not going to take you anywhere.”