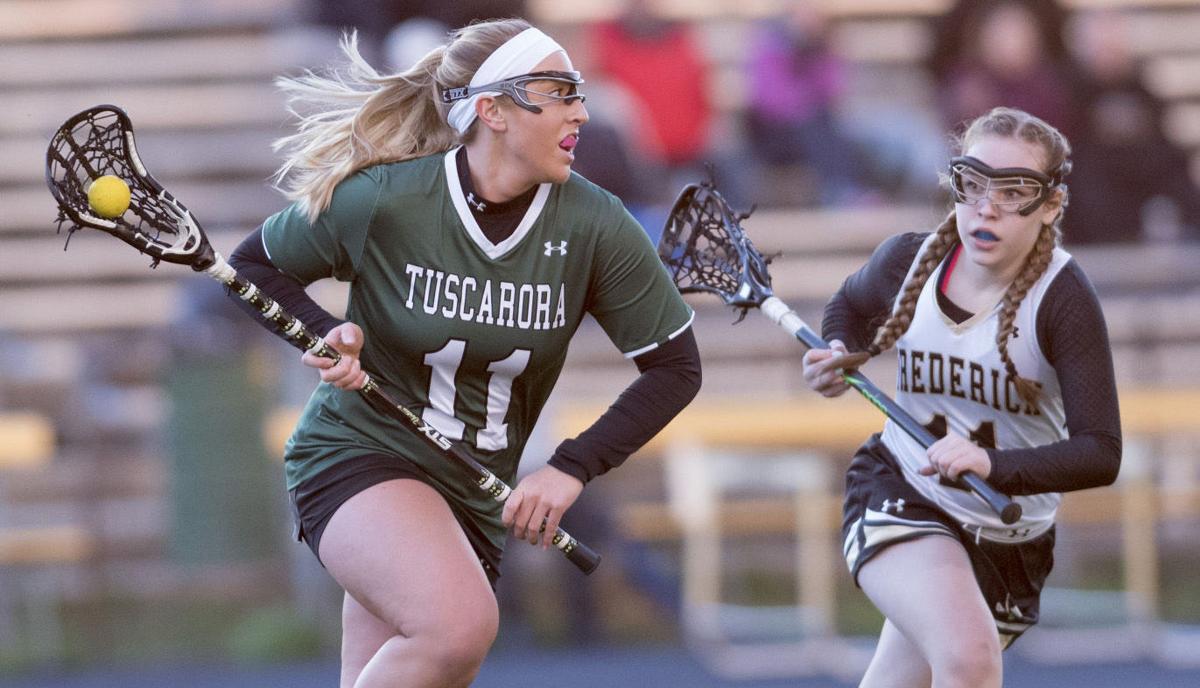 With the game on the line and the ball in the pocket of her stick on an overtime restart, Quinlin Gray had some inside information.

So, Gray was well aware of some of Lenfesty’s tendencies as the Titans tried to avoid a second consecutive overtime loss by an identical score.

“That didn’t take any of the nerves away,” Gray said.

Gray wanted to release a quick shot because she knew the Frederick defense was going to collapse around her quickly. If she was forced to pass and the ball left the crease area, that could have been bad news for the Titans because their grind-it-out offense had not been that crisp for most of the game.

The whistle blew for the restart, and Gray, standing roughly 15 feet away from the goal on a slight angle, went for her quick shot. She knew Lenfesty was prone to overextending herself after an initial fake. So, she faked attempting a high shot and then fired a low shot into the goal.

That proved to be the game-winner in Tuscarora’s 11-10 road victory Monday night over the crosstown-rival Cadets. Just last week, the Titans had lost at Brunswick in sudden-death overtime by the same score.

“I really wanted to win this game,” said Gray, who finished with a career-high eight goals. “We came in with good mojo. We wanted to win. At practice [following the Brunswick loss] we worked so much harder. We wanted this one [against Frederick] because we knew it was going to be close.”

Quinlin’s father, Bradley, the Tuscarora head coach, said everyone might as well get used to it.

“I’ll tell you right now,” Bradley Gray began. “Frederick County lacrosse this year, the parity is unbelievable. Every single night, if you don’t bring the grit to get it done, you are going home with a loss.”

He then pointed out the Titans had just won by a single goal after losing a game by the same margin.

“That’s the way the season is going to be,” he said. “You have to have it every night.”

By Gray’s own admission, the Titans didn’t have it in the first half against Frederick. They were struggling to connect on passes and turning the ball over. As a result, they fell into a three-goal hole.

Frederick senior attack Kennedy Chamblee scored three of her four goals in the first half, and sophomore midfielder Isabella Pellet added two to help stake the Cadets (1-1) to a 7-4 lead at halftime.

But then Tuscarora (3-1) made a key adjustment. Instead of passing the ball out of their own end, which they were struggling to do, the Titans began to run the ball out of potential trouble with their athletic, senior defenders.

“It’s not pretty lacrosse,” he confessed. “But that’s what we had to do.”

And making small adjustments like that throughout the course of the season will be critical, according to Gray.

“Every team in Frederick County right now, with the exception of very few, has a couple of club players, and they have good coaching,” he said. “They know what they are doing. Every night is going to be that dogfight, you’ve got to find a way.”

The dogfight between Frederick and Tuscarora played out for the duration of the contest.

The Cadets scored the first two goals and led for nearly the entire way. But their advantage never grew to more than three.

Junior attack Jena MacDonald scored her third goal of the game to pull the Titans even at nine with 9 minutes, 53 seconds to play in the second half.

Then, almost four minutes later, Quinlin Gray scored for the seventh time to put Tuscarora in front for the first time at 10-9.

Inside of two minutes to go, following a turnover by the Titans, Amanda Effland, a freshman attack for Frederick, scored her first goal of the game to bring the Cadets even at 10 with 1:25 left.

Frederick regained possession following the ensuing draw and held the ball for much of the final minute. The Cadets ran their offense, trying to set up a good look at the Tuscarora goal just before time expired.

Junior midfielder Delaney Irwin got one right in front with less than 10 seconds to go and didn’t miss the Titans’ goal by much.

Irwin had already scored a pair of goals earlier in the game, including one on a nifty spin move toward the goal.

Last Tuesday, she ended a back-and-fourth game with Linganore by scooping up a ground ball and scoring with 26 left in overtime, lifting the Cadets to a 13-12 win over the Lancers. That was one of five goals Irwin scored in that game.

This game, according to Frederick coach Brandon Brewbaker, more or less came down to, “[Tuscarora] had the ball last.”

Brewbaker was once again proud of his young team for the fight it put up. But he knows there is still lots of room for growing and learning.

“We are starting six freshman and two sophomores,” he said. “That came into play tonight with our freshmen playing like freshmen. I think we were just pushing. We didn’t settle down and run our stuff. We just get excited, and that comes with being a young team that only wants to play at one speed.”