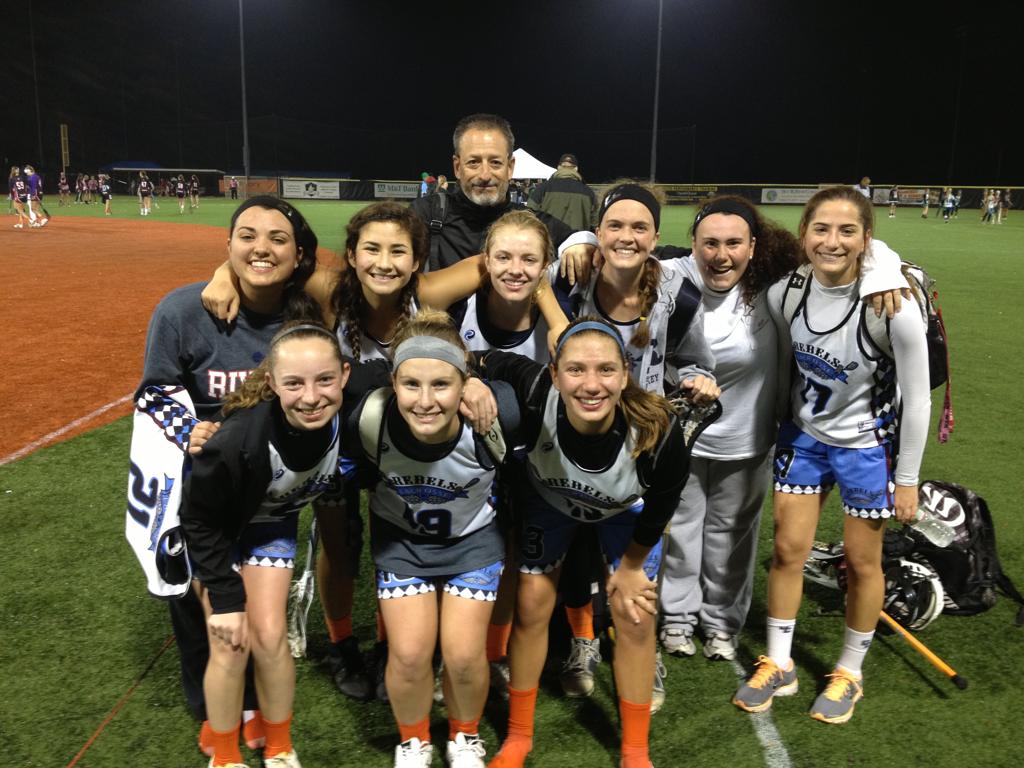 THESE ARE THE CRAZY 8's!

It was a beautiful weekend for lacrosse at the Carsins Run, where the Rebels Platinum 2020-2021 squad went 3-1 during the annual showcase which hosted 210 teams—some from as far away as Colorado and Florida.

During the course of the two days, the Rebels easily defeated the MC Elite, but the Baltimore Diamonds handed the girls their only defeat in a game that had some parents still shaking their heads at some calls made against the team. The girls bounced back on Sunday, and defeated the Looneys, 8-5 in an extremely physical bout with the well-respected club team.

Madison Flynn was the first to strike against the Looneys, followed by Nina McCormack with an assist from Sydney Witmer. Sydney Naylor tapped the score board with a bounce shot, and just prior to half-time, Madison Flynn scored again with an assist from Nina McCormack. During the second half, the Looneys missed a chance to score on a penalty shot, and in an impressive show of teamwork and moving the ball, Pilar McGuire scooped the ground ball, passed it to Nina McCormack, who delivered yet another assist to Carly Linthicum who put it in the nets to the dismay of the Looney’s defense.

In between all the action—the defense—led by Gabby Dorsey—contained the Looney’s offense with a final score of 8-5.

The Delaware Diamonds looked sharp in chartreuse, but it wasn’t enough to stop the Rebels, who soundly defeated them 15-7. The first to score was Madison Flynn with an assistant from Carly Linthicum, who gave yet another assist to Nina McCormack who returned the favor with an assist to Madison Flynn who put the ball in the net once again.

As the game progressed, the girls moved the ball well and Carly Mohart scored with an assist from Nina McCormack. The Delaware Diamonds fought back, and took shot after shot, but to no avail as goalkeeper Gabby Dorsey made save after save.

Stepping up on offense was Nadia Baskot, who scored on a penalty shot, and Pilar McGuire who scored just seconds from halftime. In the second half, after Madison Flynn, Erin Freeman, and Cheryl Krismanich each scored, the referees declared “no draws” which enabled the Diamonds to inch back into the game, but even on a penalty play where the goal keeper was forced out of the net, it was to no avail. Additional goals were made by Sydney Naylor, Carly Linthicum with an assist from Nina McCormack, and Kaitlyn Gallagher.

After the game, Coach Amanda Harrington praised the girls for their teamwork and hard play, but already had her sites on areas for improvement in both offense and defense. Nonetheless, Coach Harrington was clearly delighted, summing up the showcase best by saying, “Overall, this was a kick-butt weekend. All of you looked great.”

The girls play next at “Rock the Fields” on June 21-22 at Carsins Run & Cedar Lane Park (a scant 30 minutes from the Delaware line and tax-free shopping). Check your email for games times and updates.

One last thing…We’re  off the weekend of June 14-15, which is also Father’s Day. Thanks to all the Rebels dads who pack the car, haul the gear, razz the refs, and enthusiastically cheer every player as if they were their own.  Happy Father’s Day to all.